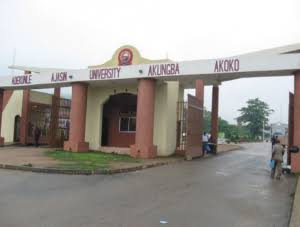 Lecturers at Adekunle Ajasin University, Akungba-Akoko (AAUA), in Ondo State have faulted the recruitment of new workers by the immediate past Vice Chancellor, Prof.Igbekele Ajibefun.

Edugist gathered that 13 lecturers were promoted without external consultants in line with due process and best practices.

In reaction to the situation, a petition was said to have been sent to the state governor, Oluwarotimi Akeredolu, by concerned Academic, Administrative and Technical staff of AAUA signed by Ahmed Naibi, Bayo Fatukasi and Olajide Afolayan for SSANU, ASUU and NAAT, respectively.

The management of the institution led by Prof Ajibefun has been accused of demonstrating intense aversion for rules and regulations guiding universities.

They said: “For example, as at June 2019, the total number of AAUA staffers was 1,350, between July and December, 2019, the former VC appointed additional 1,211 staff to all Departments/Centres/Units of the University thereby overbloating the already bloated wage bills.”

“Contract for production of students ID was originally awarded at N900 per student before Chairman, Governing Council, Dr. Tunji Abayomi, assumed office, but he re-awarded the contract at N1,900 per student, the added.

The petitioners also alleged misappropriation of the university’s lean resources on overseas trips and other frivolities.

The group expressed concern over the welfare of its members, university survival and education industry, calling on Governor Akeredolu to pay a passionate attention to the university to rectify various anomalies in the institution.