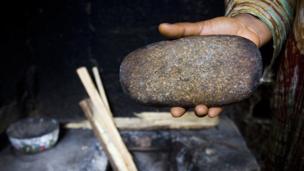 Simone explains how her mum ironed her breasts aged 13
Breast ironing awareness should be made part of the mandatory school curriculum to protect young girls from abuse, the National Education Union has said.

The practice involves ironing a girl’s chest with hot objects to delay breasts from growing, so she does not attract male attention.

Conservative MP Nicky Morgan said teachers must also be educated, as they have a “very important role to play”.

The Home Office said teachers have a duty to report concerns.

‘Not allowed to cry’
“Kinaya” – whose name we have changed – lives in the UK.

Her family descends from west Africa – where breast ironing originates – and she was subjected to it aged 10.

She said her mother told her that “if I don’t iron them, men will start coming to you, to have sex with you”.

It is often the child’s mother who will undertake the breast ironing, which usually involves heating a stone or spoon on a flame then pressing, massaging or flattening the breast.

This can go on for months.

“Time does not erase that kind of pain,” Kinaya explained.

“You’re not even allowed to cry out. If you do, you [are said to] have brought shame to your family, you are not a ‘strong girl’.”

“Kinaya” and her daughter
Kinaya is now an adult with daughters of her own.

When her eldest turned 10, her mother proposed that she be breast ironed.

“I said, ‘No, no, no, none of my children are going to go through what I went through, as I still live with the trauma.”

She has since moved away from her family, believing there was a real risk they would have performed breast ironing on her daughters without her consent.

Some girls are also made to wear an extremely tight strap around their chest
It is thought that around 1,000 girls in the UK have been affected by breast ironing.

But while awareness is growing around female genital mutilation (FGM), there are fears that few people know about breast ironing.

One woman told the Victoria Derbyshire programme she only realised breast ironing was not normal when she discovered her body looked different to her classmates during a PE class at her UK school, which led her to become distressed.

Her sister had breast ironed her from age eight, but her teachers failed to notice when she became withdrawn and stopped wanting to take part in PE lessons.

“If my PE teacher had known, if they were trained, I could have had the help I needed growing up,” she said.

Kiri Tunks, joint president of the National Education Union, is now calling for school staff – and in particular PE teachers – to be taught how to notice the signs.

She also wants it to be covered in schools in the same way as FGM will be from 2020, as part of compulsory relationships and sex education classes in secondary schools.

Ms Morgan said issues such as breast ironing should be “tackled, addressed, talked about and stopped”.

She added that the curriculum should be kept “under review as different areas of practice, custom or abuse come to light”.

Those working with girls and young women should also be taught to recognise that breast ironing is taking place in the UK, she continued, and to be able to “advise the young person on what action they need to take”.

A heated stone is often used in breast ironing
One woman, “Simone”, told the Victoria Derbyshire programme she was breast ironed aged 13 when her mum found out that she was gay.

“According to her, maybe I was attractive because of my breasts, so if she can iron them and I’m flat, then maybe I’ll be ugly and no-one will admire me.”

In her case, the breast ironing went on for months.

Like many young girls, she was also made to wear an extremely tight strap around her chest to suppress them even more – which caused her difficulty breathing.

A few years later, when she had a baby to the man she was forced to marry, the long-term damage became apparent.

“When it comes to breast feeding, it’s so strenuous, like there’s a knot inside,” she explained.

“It seemed like maybe some of the nerves were destroyed.”

‘Hidden crime’
There is no specific offence for breast ironing, but the Home Office described it as a form of child abuse and said it should be prosecuted under general assault laws.

Angie Marriott, a former gynaecological nurse who now works as a safeguarding lecturer for Cheshire Police, said that the true scale of breast ironing in the UK was being obscured because of under-reporting.

She described it as a “sensitive, hidden crime”, with women afraid to speak out for fear of being “ousted from their communities”.

“I know this is happening because people have divulged it to me,” she said.

“And they’ve said it’s the first time openly that they’ve ever spoken about what’s happened to them, and they felt ashamed.”

Angie Marriott says many women are too scared to report they have had their breasts ironed
Simone still bears the scars from the abuse she endured, and wants to raise awareness of the crime.

“To say the least, it’s an abuse. It hurts, it dehumanises you,” she said.

“You are not a human being.”