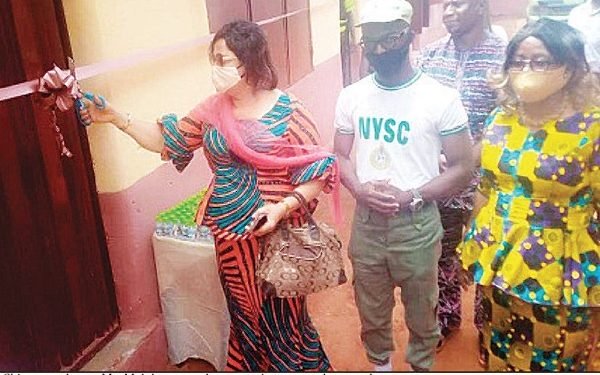 As part of Shiyan’s community development service project, he also fixed a generator, laptop, projector and some learning materials.

While speaking during the inauguration of the projects, Shiyan, a 2019 batch ‘C’ Stream 1 corps member noted that he was motivated to help as a result of the deteriorating state of the school building.

“With the help of my colleagues, I raised fund from philanthropists with which I renovated the classrooms, a dormitory, three toilets. And fixed other equipment including a power generating set, a laptop computer, a projector and learning materials,” he said.

While inaugurating the projects, Commissioner for Social Welfare Children and Women Affairs, Lady Ndidi Mezue said she was overwhelmed by the corps member’s efforts.

Mezue, was represented by a Director in the Ministry, Mr. Ernest Onyeka. Hence, urged corps members to always seek to impact other people’s lives positively. She made a cash donation of N50, 000 to the school.

The NYSC State Coordinator, Mr. Kehinde Aremu, represented by the Assistant Director, Press and Public Relations, Anuli Molokwu, applauded the corps member for his selfless service to the pupils of the school.

He thanked the school’s management for their humanitarian services caring for special needs children, praying God to bless them in return.

Aremu, however, praised the corps member for lifting the school, urging others to emulate him.

Thanking Shiyan for his good work, Proprietor of the school, Mr Afam Ndife, noted that the project was executed when it mattered most.

He sought more help from those present, saying the school needed support, especially in the area of feeding.