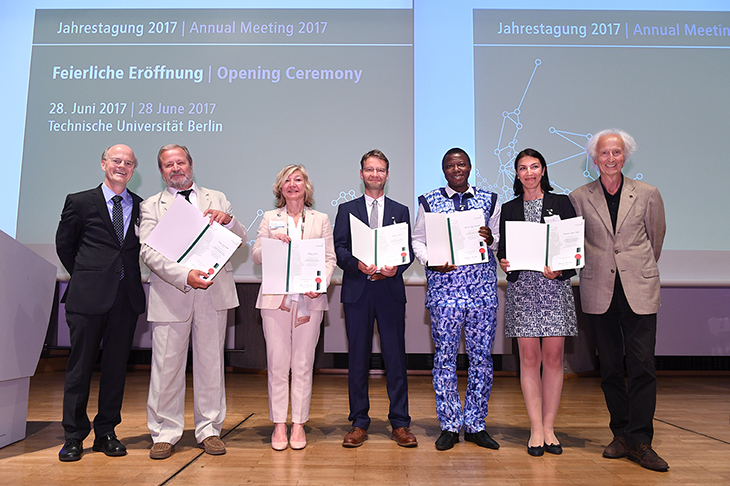 For the ninth time already, the Alexander von Humboldt Foundation has honoured innovative network ideas of Humboldtians designed to promote academic and cultural ties between Germany and their own countries, or strengthen cooperation in the respective countries and regions.

Each Humboldt Alumni Award comes with up to €25,000 and is funded by the German Foreign Office. The award ceremony was held on 28 June 2017 at the Humboldt Foundation’s annual meeting in Berlin.

This year’s awards go to initiatives of Humboldtians from Belarus, Canada, Greece, Nigeria and Turkey.

Professor Remi Raji-OyeladeOyelade made Nigeria and Africa proud at the Annual meeting in Berlin of Humboldt fellows where he is one of five honorees from 140 countries to receive the Alumni Award for 2017. Specifically, Remi is the winner of “the Humboldt Award 2017 for Innovative Networking Initiatives”. This is the Fourth for Nigeria and the first ever for the University of Ibadan where Remi is a revered professor.

Below is the award blurb about the professor written by the foundation:

Professor Raji-Oyelade will build a cross-border research network throughout Sub-Saharan Africa that will be dedicated to the development and dissemination of proverbs and “post proverbials” in African languages. As part of the initiative PACE Network: Post proverbial Africa – Building a Corpus of Wits in Texts, Media and Performance, proverbs and post proverbials of 13 local African languages will be collected in the course of interviews, focus group discussions and by the use of questionnaires. These proverbs and post proverbials, together with translations and explanatory notes, will be made available to members of the network in a database and as part of a web application. A multilingual publication is planned as well.

The Georg Forster Research Fellow Aderemi Raji-Oyelade is a professor at the Department of English at the University of Ibadan in Nigeria.