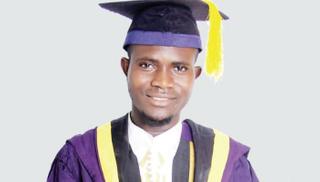 In the face of severe financial challenges, Abdulrasheed Ahmed, 26, sponsored himself, with little support, and still graduated with a first-class degree from the Department of Civil Engineering, Federal University of Technology, Minna, where he graduated with 4.72 CGPA in the 2017/2018 academic session. He tells TUNDE AJAJA about his experience in school and why he persevered to achieve the feat

What have you been doing since you graduated?

A few months after my graduation, I was at home, resting and thinking of how I could get busy or where I could work till it was time for the National Youth Service Corps programme when a man I once worked with called me for internship in his company in Lagos. At the moment, I’m managing one of the sites managed by the firm as a site engineer. I would say the call came at the right time.

With the much you learnt in school and now that you are on the field, would you say you are in your dream profession?

Since I was a child, I had always aspired to become a practising civil engineer and a lecturer. Specifically, I wanted to become a structural engineer and I would link that to the things I saw when I was young. The rate at which innovation occurs in the construction of infrastructure across the globe inspired me, especially when you look at some countries. I felt I should be part of the game changers and I’m glad that I’m on the right path. Now that I’m practising, I love the profession some more, being a professional course that avails one of job independence, among several other benefits. Then, when we talk about social amenities and infrastructure, it’s a profession that is at the heart of making these things happen and of course it can solve the country’s problems in that regard, talking about substructure (foundation, culvert) and superstructure (building, highway, rail tracks).

There are times people say there is variation between what is taught in classes and what happens on the field. What has been your experience so far?

The differences are not pronounced. It’s only a few of what I learnt that are not applicable on construction sites. What I was taught in school is fundamental to the skills I deploy on duty, so I would say they complement each other.

Being the course you had always wanted, would you say that made it somewhat easier?

It wasn’t difficult. Although it was challenging along the line; good time management, planning and prayer made it easy for me. I believe that when you have deep interest in what you do, even when there are hiccups here and there, you wouldn’t want to give up; rather, you would want to unravel the cause of the difficulty and simplify it for better understanding. And for me, I aimed to graduate with a first-class degree right from the time I got to school. Throughout my academic journey; from primary school to secondary school and then polytechnic, I have always been among the best students at each level, even though I had a little difficulty with my O level. I had challenge with English language but passed at my second sitting. I found the Unified Tertiary Matriculation Examination easy but I took it four times before I could gain admission into the university. It was not as if I did not pass the exam each time I took it, but securing an admission into the university of my choice was challenging, so I had to keep taking the exam. Having gone through those, it was expected of me to sustain the culture of excellence when I entered the university. It might not have been as simple as ABC, but it was achievable for anyone who desired it and worked towards it.

How many of you graduated with a first-class degree in your class?

I think seven of us graduated with a first-class degree, and I started having grades in first-class category from the first semester of my first year. I would say I owe mine to determination, hard work, revision, and reviewing my performance from time to time. I could keep myself in check and then prayer, which is very important. There were times I had to deprive myself of some social engagements so I could focus on my books. During the daytime, I spent most of my time in the library reading textbooks and using the Internet for tutorials. In fact, the library was of great help to me because of the serenity and the volume of materials there.

Does it mean you were not involved in other activities apart from your studies?

I would say I was partially social and I was very strong and active in school politics. I was the president of the students’ association in my department. That was why I mentioned good time management earlier, because if you are not careful and you don’t manage your time well, involvement in politics could be a huge distraction. I guess it would be worse if you go into politics without having a goal, because it is the goal that keeps you in check when you are falling short in your academic work, which is the primary assignment. Knowing that schedules could change during the day, I made sure I read early morning after Subh prayer and in the evening, after Ishai (8pm prayer). I’m not the type of person to read at night, so I made sure I made good use of those times I already set aside. On average, I made sure I read for about eight hours every day while I slept for about six to seven hours daily.

What would be your advice to students who wish to have your kind of results?

Students who want to be successful must pay attention to details and be a critic of their own work; they must be studious, know what works for them, be prayerful and stay focused. For example, some people say engineering is difficult but I never had any fear. I think people have misconceptions and probably they listen to others who simply say engineering is difficult. With that, they would be scared even before entering the department. People told me it would be difficult to graduate with a first-class degree but I didn’t let it affect me negatively. I think students fail due to lack of early determination, poor time management and engaging in unnecessary activities.

What part of your course did you enjoy more than others and which part did you find more challenging?

I enjoyed Geotechnical Engineering. I took it from my third year to my fifth year. It is a very interesting course. However, structural analysis courses are always challenging because they require much time to understand and they involve trek calculations which are difficult to comprehend individually. But, overall, I tackled it head on. While on holiday, I tried to revise and review the notes of the previous sessions.

As an undergraduate, what were your most memorable moments?

My happiest moment was when I recorded 5.00 GPA in the first semester of my second year. I was glad I had A’s in all my courses. I repeated the feat in the second semester of my final year and those contributed to my feat. The most embarrassing moment was when I felt I was marked down in two courses. I got C and B in those courses respectively. I complained to the lecturers, but they said I should accept the grades like that. One of them even said that he knew I was targeting first-class level, which further confirmed my impression that I was marked down. I was really sad but helpless because I could not challenge their authority. But I’m glad it didn’t affect my overall performance.

The unemployment rate in Nigeria makes life tough for some fresh graduates after leaving school, does it scare you?

It could truly be scary. Jobs are scarce commodities in Nigeria today and it seems one has to be connected to get a job, but I believe people who are above average and have something extra to offer would stand a chance. And thankfully, the experience has been rewarding for me, at least for now that I am still an intern. I believe God will make a way for me at every level.

Talking about those times you had 5.00 GPA, were there times your parents rewarded you?

They did many times; they rewarded me with big smiles and prayers which encouraged me to do more.

Did you face any challenge as an undergraduate, like financial issues or issues with some of your courses?

Funding was my major challenge because once the school was in session, I wouldn’t be able to work again. There were some semesters when nothing would be sent to me from home. Not that my parents intentionally did so, but they were not financially buoyant.

How tough was it?

It was tough, but Alhamdulillahi (Glory be to God), I sailed through and things are getting better now.

Could you say more about it?

It was my elder brother who was responsible for my upkeep. Since I finished secondary school in 2009, that has stopped because he lost his job. I had to start finding means of surviving on my own. In 2010, I went into weaving (Aso-Oke) and I started learning how to make it. After a while, I became an expert and I was working on my own. It was the money I realised from weaving that I used to register for UTME. In addition to that, I organised extra-mural classes. I sponsored my National Diploma programme in the polytechnic and largely I sponsored my university education by myself. But, with all the challenges I encountered in the course of study, I didn’t let them affect my drive for academic excellence. I never thought of giving up. I have been facing financial challenge for a long time and I have devised a mechanism of tackling it. I obtained a distinction in my ND and I’m happy I was able to graduate with a first-class degree too in the university.

I would like to work with a renowned construction company. I also thought of being a lecturer. I think I have passion for both. So, I aspire to be a successful civil engineer (structural engineer) or a seasoned lecturer.

Were you in a relationship or you saw it as a distraction?

I was and it didn’t distract me. In fact, she encouraged me to achieve my goals.

Did you stay off campus or you stayed in school?

I experienced both – on campus and off campus.

Would you say you enjoyed cooking for yourself or not?

Yes, I did; though it was time consuming. However, cooking for myself was fun.