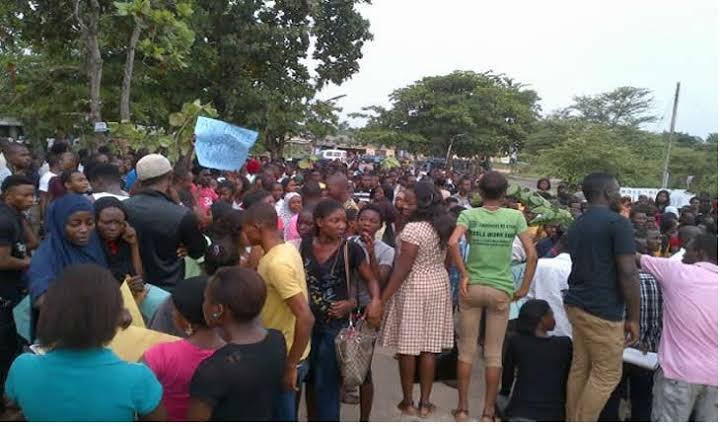 Students of the Polytechnic, Ibadan, have protested against difficulty in tuition payment and faulty school portal.

According to the students, the school portal has reportedly hindered them from registering for their first-semester examination.

The students of the institution gathered that at the institution’s gate on Monday October 12, rendering different songs to pass their message across.

A male student, who pleaded anonymity, said that took to the streets, not to fight the school authorities, but to express their displeasure with the directives issued by the management.

The student, who said that they had been home for six months, added that it would be unfair on the part of the school authorities to ask them to resume and start examination immediately.

“I am an HND II student. To pay with the portal has been a big issue. Last year, I had to pay my fees twice because after paying the first time, it wasn’t displaying again.

“Even now, the portal is saying that I’m still owing medical fee, internet fee, and insurance fee. Whereas, I have paid for all these. This is highly frustrating,” he said.

“Also, we had been home for six months and we can’t resume and a week after, be asked to sit for the examination.

“Our hostels are not conducive; they are all smelling and hazardous to our health,” he added.

Meanwhile, the school authorities have announced the postponement of the first-semester examination for the 2019/2020 academic session, earlier scheduled for Oct. 12, to Oct. 19.

The postponement, according to a statement issued by the Registrar, Mrs. Modupe Fawale, is to enable students, who were unable to meet registration and tuition payment deadline, to do so.