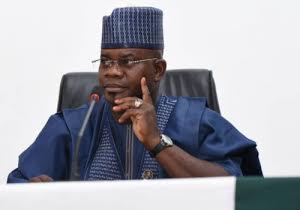 In a bid to strengthen quality academic performance in his state, Governor Yahaya Bello of Kogi on Thursday inaugurated the distribution of free education and instructional materials to pupils across the 21 local government area of the state.

The governor also distributed sixty-six (66) free modern laptop computers to the LGA staff who were recently trained across the state.

Represented by the Commissioner for Local Government Administration and Chieftaincy Affairs, Engineer Abubakar Ohere, at the inauguration ceremony in Lokoja, he said that at the inception of the New Direction Government, an emergency was declared on productivity and ensuring delivery of quality education to Kogi children.

He also said that there had been lots of reforms in the state’s civil service and the education sector as reflected in the New Direction Thematic blueprint.

According to the commissioner, the distribution of the instructional materials aimed at reverberating the education sector and ensuring that pupils are given the necessary tools required for an excellent performance.

He added that the distribution of laptops was also important to boost the capacity and productivity of the workforce in the state particularly those at the local government level.