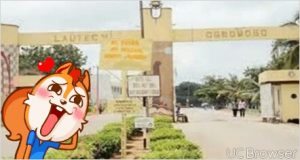 In a just concluded meeting that lasted for about an hour between the management and the aggrieved students of the varsity, many important personalities controlling the affairs of the school were present. Among them were the hibernated Vice chancellor of the university, Professor S. Gbadegesin, Deans of faculties, Dean student affairs and many other major stakeholders.
The aggrieved students were offered the privilege to voice their minds before those present at the meeting.

At the meeting, facts were given on the payment of funds by the two funding states (Oyo and Osun). A billion Naira remitted into the school account by the Osun government is undoubtedly an affirmation. Also, the acclaimed and controversial 500 million Naira remitted over time by the Oyo state constituted authority was also accounted for by the management. It is now crystal clear that more than one billion Naira is in the school account awaiting disbursement by the management.
Many disturbing issues were raised by the students, some of which were duly addressed by the respected vice chancellor and other big wigs from the chamber of the council.

After series of progressive deliberations by the management and contributions from the students, a student leader enquired to know when the school would commence lectures in all departments and faculties. Then the VC rose and said magisterially that academic activities will begin in earnest on Monday 16th October, 2017. In fact, a pioneer professor in the varsity also established the fact that sanity will return to the school premises in a couple of hours. This invariably means that the union will be settled in a matter of days. During the interrogation of some of the professors, th
e declaration made by the Vice Chancellor was reinforced by the professors. Since the paramount leader and the controller general of affairs has promised, in the name of God almighty, academic activities commence uninterruptedly Monday next week.

All hands on deck now, while we await the magical speedometer to be run by the council in fast tracking the payment scheme of the tired and “unretired” workers of the varsity both the academic and non academic staff. We were also reliably informed that the student union has suspended their meeting for now, in order for the new development to be executed before their general Congress on final resolutions.

Now, all ladokites should start preparing for serious academic work, as the long time lost hope will be restored in a couple of days.