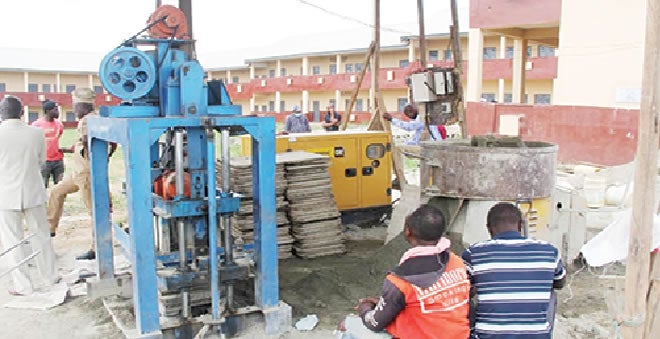 The Oyo State Government has accused the Headmistress of the Community Basic School, Ologuneru, Ibadan, Mrs Felicia Ogunrinde, of illegal leasing of school premises to Seun Elegbede, who operates a block moulding industry.

The accusation was made by the Executive Chairman of the State Universal Basic Education Board, Dr Nureni Adeniran, while addressing journalists during the  monitoring of schools in the state capital, on Tuesday, 5th May, 2020.

He stated that eight persons had been arrested for the illegal operation of the block moulding industry on the school premises.

Adeniran expressed his displeasure at the activities of the encroachers on the premises of the model school.

The school was built under the Federal Government-UBEC/Oyo State Universal Basic Education Board intervention project.

It was at the Agbopa-Akufo Farm Settlement in the Ido Local Government Area of the state.

He warned members of the public against the misuse of public property.

Adeniran also stressed that the encroachers would be punished. It would serve as a deterrent to others.

He expressed concern over some of the facilities in the school that had already been vandalised by the block moulders.

“They have turned one of our classrooms into a bedroom, with their personal belongings scattered around the school.

“Invaders have taken over some of our public schools, despite that they are fenced.

“The invaders break in, destroy the property and create nuisance in government schools.” the OyoUBEC boss stated.

Adeniran, however, concluded that the schools’ monitoring would be extended to other parts of the state.