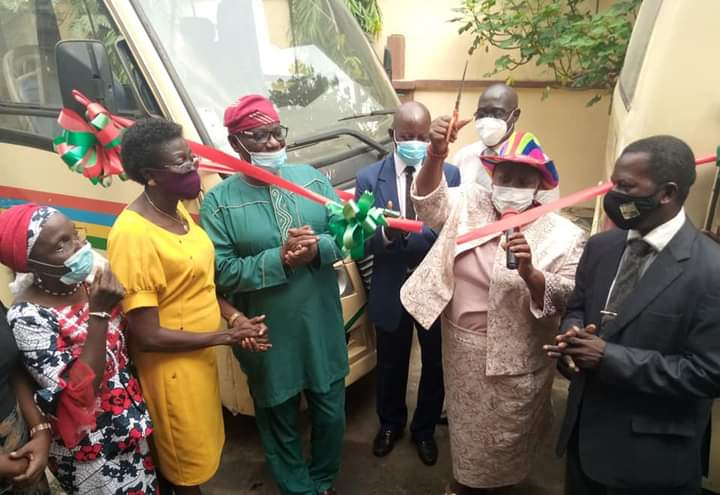 Speaking on Tuesday at the launch of the items acquired and refurbished by the District through the intervention of the Governor, the TG/PS said that the State Government focussed on the Education and Technology pillar of its T.H.E.M.E.S. Agenda.

She added that the provision of computer systems and other technological infrastructure would make the students 21st-Century compliant.

Adekanye listed specific areas of intervention by the Governor to include the provision of 150KVA generator, refurbishment of non-functional staff buses, donation of a well-equipped library, modern ICT centres, the rehabilitation of the District’s headquarters and provision of several other office tools for the staff.

She said that the gesture, which is in addition to the end-of-year package already made available to teachers within the District, would serve as a morale booster for the staff and make the Christmas and New Year celebrations a memorable one for them.

The Supervising Tutor-General/Permanent Secretary, who is also the TG/PS of Education District II, expressed the belief that with the giant strides recorded within the last four months when she assumed office as the Accounting Officer of the District, there is hope of greater achievements in the coming years.

“From the time l assumed office, everyone and every hand has been on deck despite the serious challenges posed by the pandemic this year; we realised our sole objective of improving learners’ outcomes in the District. I want to thank all those who have made this objective realisable,” Adekanye stated.

Speaking on the newly renovated buses, the TG/PS stated that the gesture will aid the smooth mobility of teachers to work and help increase punctuality of teachers at their duty posts with the availability of additional functional staff buses.

The TG/PS also recognised some students from different schools who had won laurels for the District since the beginning of the year as well as some Teachers and Principals, who were exceptional in the discharge of their duties.

She recalled that Gbaja Girls Senior High School took the 1st position at the Organisation for Woman in Science for the Development of World (OWSD) Annual Quiz, while three students from different schools within the District, namely, Edeh Rhema, Ademola Waris and Adeyinka Gboluwaga excelled at the just concluded Spelling Bee Competition by emerging 3rd, 4th and 5th positions respectively.

Acknowledging the fact that the State Government recognised the tremendous contributions of the District towards improving education in the State, Mrs. Adekanye added that awards, trophies and letters of commendation were received from the government on the wonderful performance of the students at both State and National competitions.

She narrated how her visit to all schools within the District made it possible for her to have first-hand information about the state of the schools, identify their peculiar needs and sought for interventions from the State government, through the leadership of the Ministry of Education.

Also speaking at the event, the Chairman of Nigeria Union of Teachers, Lagos State Chapter, Otunba Adedoyin Adesina, who applauded Governor Babajide Sanwo-Olu’s disposition to staff welfare, prayed for divine enablement for the Governor to continually have the love of his workforce at heart.

He underscored the importance of conducive work atmosphere to learning, saying that the comfort of students and teachers improves deliverables and increases productivity.

While noting that to whom much is given, much is also expected, the NUT Chairman challenged the staff of the District to remain loyal and committed in their duties.