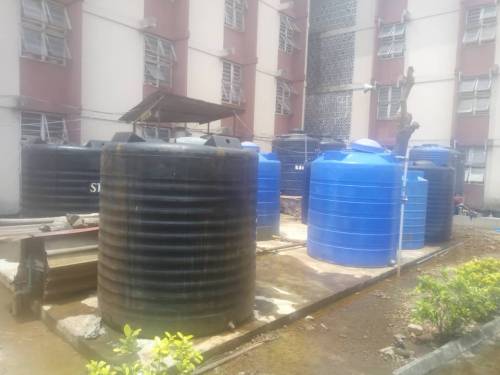 Students resident in Makama Hall have berated the hall management for not making any move to fix the water problem in the hall, stating that the water in the hall is “the new source of orange juice in Nigeria”.

Students of Makama Hall of the University of Lagos, Yaba, have decried the contaminated water being delivered to their halls for daily use.

According to the students, the water is not hygienic enough as usage of it could lead to stomach illnesses, vomiting, diarrhea and skin rashes.

It was gathered that another hall in UNILAG, Honours Hall (a female-only hall) also suffered the same fate, as water supplied to the hall is also polluted.

However, judging by the look of things, the water supplied to Honours Hall is not as bad as Makama Hall’s.

Students resident in Makama Hall have berated the hall management for not making any move to fix the water problem in the hall, stating that the water in the hall is “the new source of orange juice in Nigeria”.

The students faulted management of the institution for failure to provide basic amenities for students, despite being ranked one of the top universities in Nigeria.

“Despite claim to being the nation’s pride, it’s sad that University of Lagos can still suffer from common amenities like water, as the university hall of residence for students is now the new source of orange juice. It’s as bad as drinking gutter water, because students are expected to cook, bath and sometimes drink this water,” she said.

Students who had tried to manage to use the water said they had developed skin rashes and were feeling uncomfortable.

A student said: “I boiled the water and used it cook, but the aftermath was not good. I have had food poisoning from using the water. I don’t even bother to cook with the water. I will rather buy sachet water and be happy.”

“The water has given me eczema and rash. All I do now is to buy sachet water to cook and bathe,” another student said.

The students demanded immediate action from the management of the school for the supply of potable water. They also appealed to the school to fix every channel the water passes through to get to all hostels and halls.

“We want the school authority to promptly look into this matter and provide a quick and lasting solution to this problem as it is a matter that’s affecting students,” a student added.