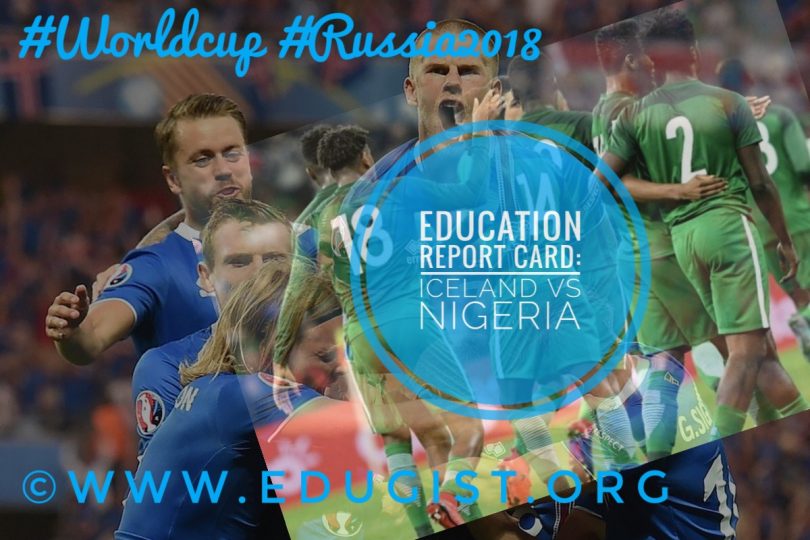 We told you everyday Nigeria plays an opponent in the ongoing world cup, we present you an Education report card, a sort of education comparison using some indices.

For today’s match between Iceland and Nigeria, see the report card below. And leave your comment.

Nigeria: compulsory for 9 years from age 6-14

Nigeria: 37 in primary, not available in secondary.

Iceland: An OECD report in 2016 said an ageing teacher population was raising fears of staff shortages in the future. Two years earlier, Iceland said it wanted at least 90% of school students to reach minimum reading standards – up from 79%.

Nigeria: Boko Haram’s reign of terror has devastated the education system in the northeast. Almost 1400 schools have been destroyed, over 2295 teachers killed and three million children need emergency support on education.

Iceland: Striker Alfred Finnbogason who shocked the world by scoring Iceland’s goal in a 1-1 draw with Argentina spent two years being educated at a primary school in Edinburgh, Scotland, because his father was studying at university there. He said: “It was a fantastic time, a big influence on me.”

Nigeria: Chelsea winger Victor Moses was playing football in the street at the age of 11 when his parents were murdered. Family members paid for him to go to England a week later as an asylum seeker