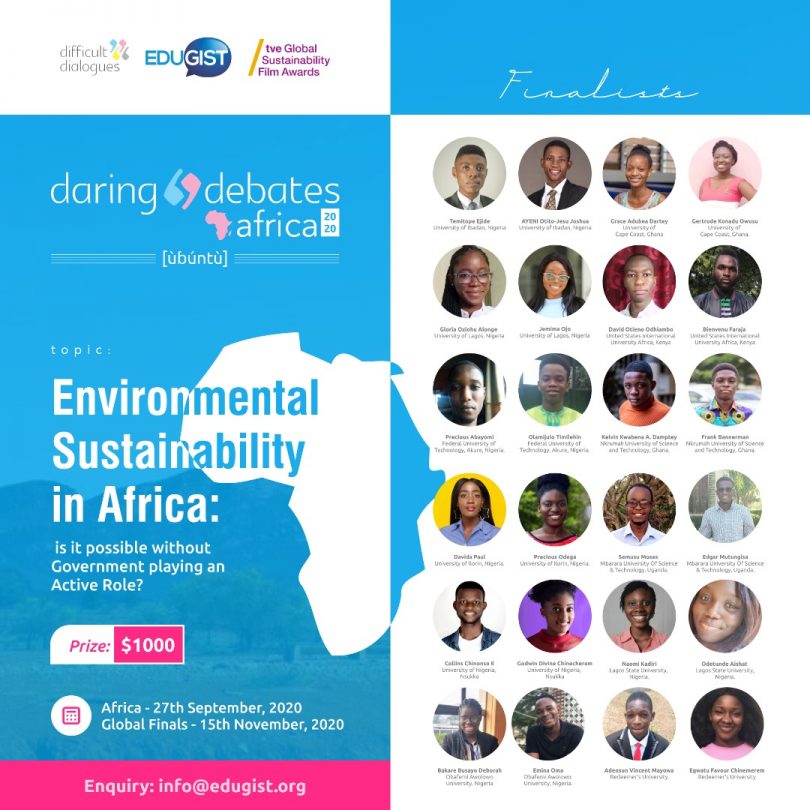 Two students of the University of Lagos, Nigeria, Gloria Oziohu Alonge and Jemima Ojo have emerged winners of $1,000 cash prize for the maiden edition of the Daring Debates Africa.

The duo had competed in a very tough round of debate alongside finalists from 12 universities across other African countries in Nigeria, Ghana, Kenya, and Uganda on a virtual platform(Zoom) on September 27, 2020.

Daring Debates, an initiative of Difficult Dialogues in partnership with the TVE Global Sustainability Film Awards is an annual program running for the past five years. Thus, to further expand the initiative, it was extended to Africa for the first time to celebrate the 6th anniversary making it a global event.

The debate themed: “Environmental Sustainability in Africa: is it possible without Government playing an active role?” had 12 speakers each for and against the motion for discussion. 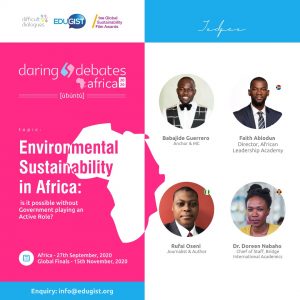 Each Institution had 3 mins to propose and oppose the motion to the jury comprising, Rufai Oseni, Faith Abiodun and Dr. Doreen Nabaho with 1 minute for questions and comments after each round comprising 3 Institutions.

The Daring Debates hosted by Babajide Guerrero and organised in Africa by Edugist lasted for about 4 hours. The jury gave comments, recommendations and suggestions after watching all debaters. Thus, the competition had three institutions in the first, second and third place accordingly.

Shortly before announcing the winners, one of the judges, Rufai Oseni volunteered to personally prepare the winners for the global finals coming up in November. He stressed the need for Africa to emerge the global winner. This, was in addition to the preparations Edugist had made for the winners who would represent Africa at the global level.

University of Ibadan came 3rd, Obafemi Awolowo came 2nd while University of Lagos came 1st. All debaters would be given a certificate of participation.

The proposing speaker for Team Unilag,  Gloria Oziohu Alonge, after emerging the winner, expressed her delight at the feat.

She said: “I honestly feel honoured and grateful. I am particularly happy that I get to represent Africa in the global rounds and show the world how uniquely amazing Africans really are.” 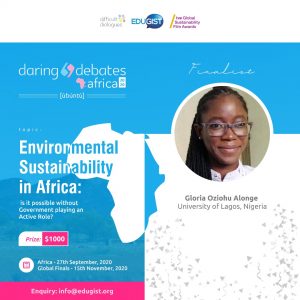 Speaking with Jemima Ojo, the opposing speaker for Team Unilag after emerging the winner, she expressed her excitement over the feat.

“I’m honored and really happy!
Although, I can’t help but think about the comments of the judges. I guess we have a lot of work to do,” she said. 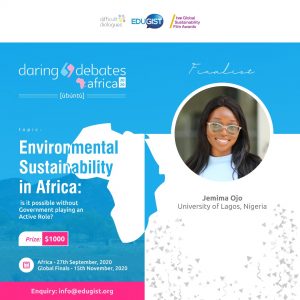 The CEO of Edugist, Elvis Boniface commended all the debaters, jury, participants and viewers across all the platforms and those who streamed live on Facebook and YouTube.