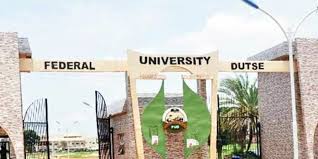 An undergraduate of the Federal University, Dutse, Jigawa State, Aminu Adamu, has been languishing in detention after security officials comprising the police and men of the Department of State Service, arrested him over a post on Twitter.

According to a report, the post alleged that the wife of the President, Major General Muhammadu Buhari (retd.), Aisha, was “feeding fat on poor people’s money”.

Aminu’s uncle, Shehu Azare, in an interview published by BBC Hausa on Monday, said the victim’s father, Mallam Ádámù, was not aware of his arrest until about five days later.

Appealing to the First Lady to release Aminu, Azare, he said Aminu’s father was not aware of his son’s condition until one of his friends informed him.

The uncle said, “His father did not know about his arrest. It was five days later that one of Mallam Adamu’s friends called and told him that his son had not been seen in school for about five days. That was last Monday.

“Then a day after, Aminu called his father and told him what was happening, that he was arrested and taken to Aso Rock by the wife of the President, Muhammad Buhari, beaten, scolded and was arrested somewhere.

“It was a security agent that gave him a phone and told him to tell his parents. Later on, Adamu explained more to me that the school authority called him and told him that it had no knowledge of the incident before, but now they have information on his arrest.”

Azare said Aminu was about to sit his final exams in school when his whereabouts became unknown, adding that the situation threw the family into confusion.

“We are in tension because you cannot stand your son disappearing like this. The same incident happened in so many places, some you don’t even hear about again. What we are saying is that let her not be offended, let her be patient and release him, because she is a mother, that is what we are hoping,” Azare told BBC Hausa.

It was gathered that the management of Aminu’s school confirmed his arrest on Monday, noting that the undergraduate was arrested during the break.

The spokesperson for the FUD, Abdullahi Bello, in a statement, said Aminu was trailed to Dutse where he was arrested.

“The university authorities have spoken to the parents who have already engaged the services of a lawyer to handle the matter and they are hopeful for an amicable resolution soon,” Bello added.

Contacted, the start Police Public Relations Officer, DSP Lawan Shiisu, said he was not aware of the arrest.

“We didn’t make the arrest. An arrest cannot be made in my area without me being informed,” Shiisu said.

Efforts to reach the spokesperson for the DSS, Peter Afunnaya, proved abortive as calls and a message sent to his phone were not responded to as of the time of filing this report.

He said, “It is a very sad development. Whether it was the DSS or police that arrested the guy, it shows that the government has continued to deploy security assets to chase after gossip. They go to websites and social media in search of those gossiping about the President, his wife and his children, to arrest them.”

On his part, the Executive Director, Rule of Law and Accountability Advocacy Centre, Okechukwu Nwanguma, said the arrest violated the right of the student.

He said, “RULAAC is following developments around the arrest and incommunicado detention of Aminu, for posting on Twitter that Mrs (Aisha) Buhari had suddenly added weight after taking part in plundering the nation’s meagre resources as the masses endured hardship under her husband’s regime.

RULAAC condemns the arrest and incommunicado detention of the citizen as being in violation of his democratic right to freedom of expression. If, however, the government believes that it has credible evidence against him to warrant his arrest, he should not be detained illegally. “

“He should have been charged to court before now. This is yet another evidence of an attack on civic freedom and the shrinking civic space. We call for his immediate release and remedies as prescribed by law for violations of civil liberties.”

At the time of filing this report, efforts to reach the spokesperson to the First Lady, Aliyu Abdullahi, failed as he did not respond to calls or a text message from correspondents.