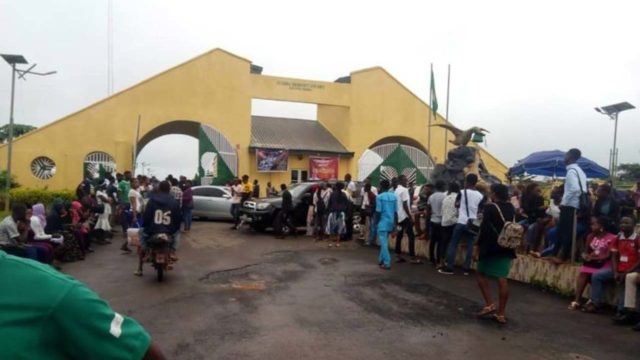 Lecturers at the Federal University Oye Ekiti (FUOYE), have dissociated themselves from the sundry allegations leveled against the Vice Chancellor, Prof Kayode Soremekun.

This was disclosed in a letter addressed to the Governing Council and signed by the Chairman, Ayodeji Ige, and secretary, Omofunmi Olorunwa, on Wednesday August 26, 2020.
The lecturers under the auspices of Congress of University Academics (CONUA), condemned the press conference held by the zonal leadership of ASUU bordering on alleged abuse of office by Prof Soremekun.

This came on the heels of a similar claim by the breakaway ASUU under the aegis of concerned members of ASUU FUOYE.

The group’s spokesperson, Dr Hammed Sakiru, dissociated his members from the resolution of the zonal leadership.

Sakiru stated that “The briefing was done to portray the university in bad light.”

He added that the institution’s representative at the event was already suspended by the university’s governing council and could no longer speak for them.

The ASUU leadership in the zone had accused Soremekun of allegedly disregarding the university’s rules and regulations since his assumption of office.

Meanwhile, the Council led by its Chairman, Dr. Mohammed Yahuza, noted that the university can only move forward when the management and council are on the same page.

“I have also seen the cordial relationship existing between the Vice Chancellor and management team, especially the way the management team has supported the VC to achieve this laudable feat.

“This shows that there is harmony between them. Such is very rare and I am very impressed.

“From what the former council and management have done to bring up these huge infrastructure, I am very optimistic that in the next four years, this university will rank among the first generation varsities in the country.”

Yahuza promised to build on the symbiotic relationship that had existed between Prof. Soremekun- led FUOYE management and the former members of the Governing Council.

He subsequently appealed to all staff to further collaborate with the management team for further achievement and success.

Responding, Prof. Soremekun said he was elated that the Council chairman has made positive pronouncement on his performance as VC for over four years now.

“Let me begin by appreciating the new chairman of Council. We have taken him round the school and he is evidently impressed with the state of facilities in the university.

“To that extent, I am happy because I am at the twilight of my tenure in the institution and I am very elated to have been able to make huge impact as regards the provision of facilities in the two campuses of Oye and Ikole,” Soremekun added.