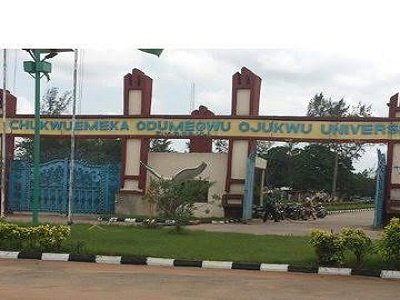 The Academic Staff Union of Chukwuemeka Odumegwu Ojukwu University, Igbariam campus, has denied opting out of the national strike by university lecturers.

The branch Chairman of ASUU, Prof. Alphonsus Aniebo stated this at a press briefing in Awka on Thursday, while reacting to an earlier statement by a group of lecturers in the university, who announced their withdrawal from the strike.

Aniebo said that the branch was committed to the ongoing national industrial action, as the institution stands to gain nothing if the union breaks away from the national strike.

“The attention of ASUU-COOU has been drawn to a press release issued on Sept. 29, by Prof. Osita Chiaghanam on behalf of an illegal association, Progressive ASUU-COOU.

“The splinter group claimed that the vice chancellor of the university has satisfied all the needs of the staff in the university.

“For the avoidance of doubt, no staff in COOU has received earned academic allowances, arrears of salaries, government component of pension and consequential differences of the new minimum wage.

“Same can be said of greater percentage of the National Housing Fund contributions by the staff of COOU,” he said.

Aniebo, therefore, said the pronouncement by Chiaghanam group did not in any way represent the stand of the ASUU branch.

“ASUU-COOU has neither bowed to any pressure nor suspended the ongoing national industrial action by the union,” he stressed.

Earlier, the spokesman of the splinter group, Prof. Osita Chiaghanam had said that continuing with the strike would amount to subjecting lecturers and their family members to hunger.

According to him, recent events in the university have precipitated a long chain of actions and reactions capable of short-circuiting the aspirations of responsible unionism, which ASUU stands for.

“We have our peculiarities; we are not funded by the Federal Government, our salaries are paid through internally generated funds.

“So, our students must be in school and pay their school fees for our salaries and some other things to be done here,” Chiaghanam had stated.

He further said that the university was being portrayed “in public domain for utterly wrong, misleading and malicious reasons, by the actions of ASUU- COOU”.