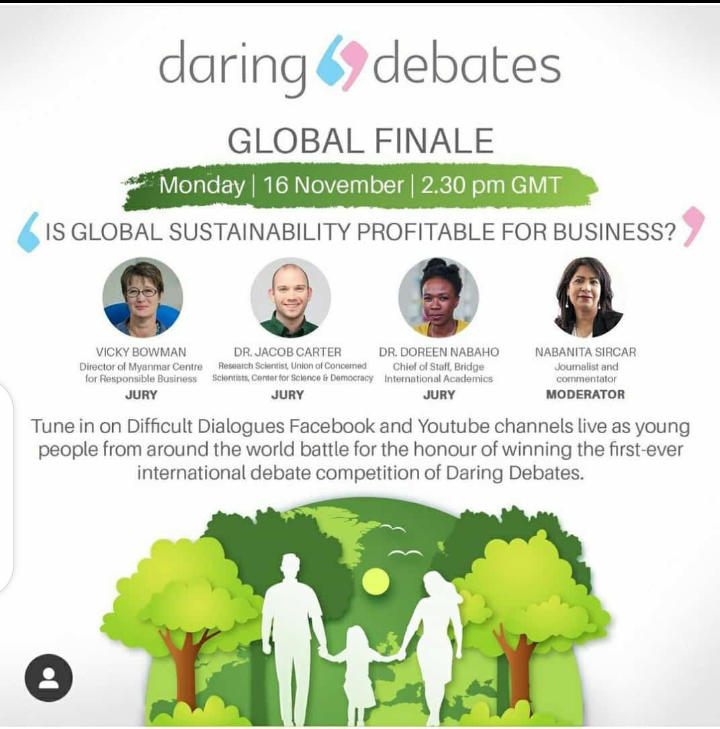 Daring Debates, a unique debating series initiated by Difficult Dialogue in 2016 brought together undergraduates from all around the world in a debate series which was held at regional and global level. The regions represented included Africa, Bangladesh, India, Myanmar, Nepal, Sri Lanka and USA.

The African region was organized by Edugist, a subsidiary of Edu Revamp Africa telling the story of education in Africa on air, online, community and in person. Edugist brought together undergraduates from twelve (12) universities across Africa from Nigeria, Ghana, Kenya and Uganda who competed at the regional level.

The global finale of the Daring Debates themed: ‘’Is Global Sustainability Profitable for Business?’’ was an integral part of the prestigious global sustainability films awards co-organised by the TVE and Difficult Dialogues.

Interestingly, there have been five successful editions of the Daring Debates conducted in various cities of India. However, this sixth edition was made global to ensure a bigger participation of young people from across the world and thus, ensuring that their opinions reached various stakeholders in the gamut.

The debate took place on Monday November 16, 2020 and the winners were announced Friday November 20, 2020 after members of the jury took time to review and delibrate.

Africa is proud to emerge winner in the maiden edition of the global debate and Edugist is proud to be an organiser and co-organiser of the Daring Debates Africa and Global finale from start to finish.

This is a Clarion call to the African government that it can only get better if we invest right in our education system.