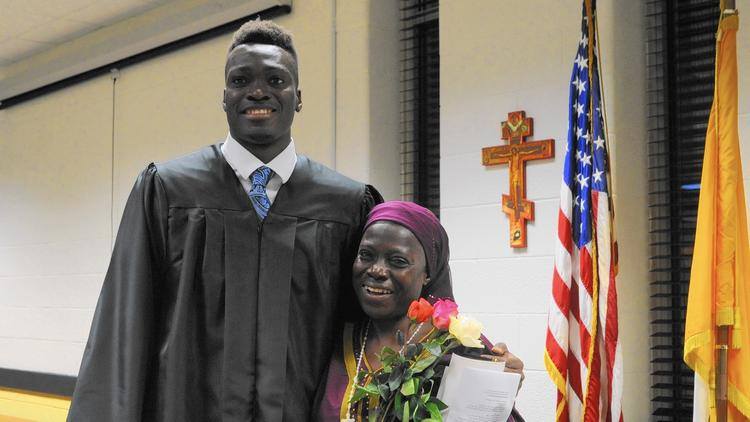 Mike Tertsea, an only child, hadn’t seen his mum, Felicia Ikpum, 56, since he left Nigeria to study at The John Carroll School in Bel Air, four years ago.

Felicia Ikpum didn’t even recognize her son when she met him at the airport Friday. After Mike Tertsea left Nigeria to study at The John Carroll School in Bel Air, she did not see him for four years.

“He has changed completely,” a smiling Ikpum said after the school’s baccalaureate ceremony Wednesday.

Mike, a basketball player at John Carroll who plans to attend the University of Rhode Island, was surprised to learn Wednesday that the whole senior class, joined by faculty members, had pitched in to make it possible for his mother to make the trek from Benue State, Nigeria, to see him graduate from high school.

“I was really, really surprised,” Mike said with a wide smile after the ceremony. “It is really a blessing and I thank everyone for coming here.”

Ikpum traveled 12 hours through dangerous territory to get to an airport and fly to the U.S., school spokesperson Joe Schuberth said.

“It was a tough drive for her,” Mike said. “She said at one point, she felt like giving up.”

It was also her first time on an airplane, and “for a while, she couldn’t recognize me and couldn’t believe it was her son,” Mike said.

Toward the end of the school’s annual ceremony and Mass, Principal Madelyn Ball told the friends and relatives gathered in the gym that one student had asked, “Is Mike’s mom coming to graduation?”

“Everyone was concerned because, you see, Mike has not been home for four years,” Ball said. She then explained how the senior class was able to raise $1,763 for his mom’s trip.

When “there were some issues once the flight was booked,” because the class was about $500 short, class co-advisor Carrie Siemsen raised the remaining money within a few hours by emailing faculty and staff.

Mike and his mother got a standing ovation as they were asked to come up on the stage, where they each thanked the senior class for bringing them together.

Some students seemed to be wiping away tears as Mike and his mother made their way to the stage.

Mike said he is an only child and his mother is his only immediate relative.

Growing up in the Benue area did mean real challenges, Mike said. “People sometimes don’t have food to eat; it’s hard to get food.”

“I was so excited,” she said about seeing him after four years, noting they had only spoken by phone over the years.

“I just believe God will take care of him, and the people here are nice,” she said. When they talked on the phone over the four years, “He was happy, and I am happy.”

Kishan Patel, student government president, said organizing the senior class “was not really difficult because there were so many people willing to help. It was a joy to do this.”

When Kishan heard Mike sometimes went to bed hungry, and now “you see this kid going to Division I with a basketball scholarship – wow, this is what it’s all about.”

Joe Kyburz, senior class president, added: “We wanted to exemplify the closeness of our community and we wanted to do something valuable for one of our classmates.”

“It was very special for all of us,” he said about the venture.