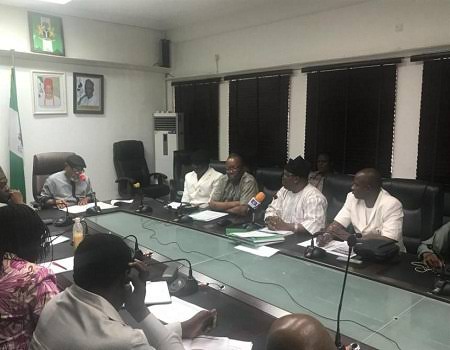 The Academic Staff Union of Universities (ASUU) has advocated that public office holders in the country be banned from sending their children/wards to study in tertiary institutions abroad.

This was disclosed in a statement signed by the zonal Coordinator, Prof. Olu Olu Olufayo and the FUTA ASUU branch Chairman, Dr. Olayinka Awopetu, on Sunday November 22, 2020.

The Union maintained that such policy would reduce the decadence in the nation’s education sector.

The Union also called on the Federal Government to compel members of the ruling class and their dependants from seeking medical intervention outside Nigeria soil.

“Members of the ruling class and their cohorts have their wards schooling abroad, so they have no commitment to end ASUU strike since political office has become occupational rather than public service.

“Until we domesticate two very important practices as laws in Nigeria, we may not get out of this doldrums -first, an act to compel all public office holders and government appointees to have their wards educated in Nigeria Public schools from primary to tertiary level.

“Until such a time when government does the needful (our ivory towers properly funded, our withheld emoluments paid amongst other issues), the struggle continues,” the statement reads.

“For the patriotic and hardworking Nigerian who desires a future for his/her children as well as building and developing this nation, it becomes imperative that you all call out the government to attend to issues apolitically and objectively to get the system running efficiently and effectively,” it adds.

ASUU explained that the union has been on strike for the past eight months over issues which has been ignored by successive governments in the country, saying the deplorable situation of our Universities have grown from bad to worse since then.

It complained that lecture rooms are overcrowded and dilapidated, students hostels deplorable, departments are starved of operational requirements, physical structures are insufficient and no vote for capital projects.

It added that for the past three decades, the university system has suffered and is still suffering brain drain arising from poor infrastructural, capital and human resource development.

“We have lost a lot of good brains to more organized and purposeful countries over pittance paid to the academia in Nigeria as well as poor funding of research and patronage of research in our universities that serve as solution centres globally.

“Developed countries (as so labeled) achieved this status through research output from their ivory towers, which is why till date, University education and funding is not toyed with or mocked as we have in our dear country Nigeria,” it says.

“The only voice that has consistently risen against this onslaught overtime is ASUU and we shall continue to resist the intentional decimation of university education in Nigeria.

“Having laid this foundation, it is shameful, irresponsible, callous, demeaning and conceiting of our leaders to sway the public away from the truth about the very reasons ASUU is on strike,” ASUU said.

The union said rather than attending to the rot in the schools, policy makers were busy feeding Nigerians with lies and advising academics to take to farming.

“We have read with dismay, watched with exasperation as appointed ministers and technocrats of the federal republicfeed the populace with lies.