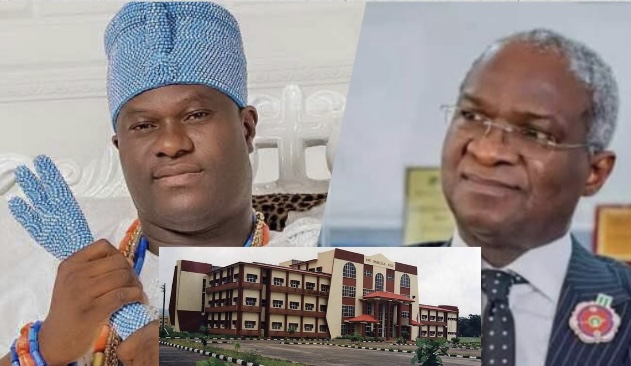 The Ooni of Ife, Oba Adeyeye Ogunwusi; Minister of Works and Transport, Babatunde Fashola, were among five personalities honoured with Fellowship Awards at the combined convocation of the Federal Polytechnic Ado-Ekiti, Ekiti, on Saturday.

The ceremony, which also marked the Institution’s 45th anniversary, also witnessed the conferment of Fellows on Tunde Fakologbon, Rotimi Ibidapo and Modupe Babalola, the wife of the founder of Afe Babalola University, Afe Babalola.

The institution’s rector, Dayo Oladebeye, expressed satisfaction with the level of development recorded since his assumption of office as the sixth substantive rector in February 2018.

He said the awardees were recognised to encourage the graduating students and those still in school to aspire to greater heights.

The rector listed some of the achievements recorded within his four-year tenure to include the construction of the Mechanical Software Laboratory and the procurement of Hi-Tech Communication gadgets for the security unit.

Others, according to him, are the construction of chief lecturers’ offices, deployment of efficient internet facilities and services and reconstruction of some dilapidated buildings on the campus.

Mr Oladebeye said the institution was currently facing the challenge of lack of enough operational vehicles, while those in operation were in deplorable conditions.

He said there was also a lack of befitting hostel buildings for students.

He listed other challenges as dilapidated staff quarters, lack of multipurpose indoor sports hall, inadequate books and other learning materials, paucity of funds for capital, overhead as well as inadequate computers and accessories for practical.

Mr Oladebeye, therefore, solicited the assistance of kind-hearted individuals and groups so that the vision and mission of the institution could be actualised.

Iyiola Oyedepo, the chairman of the institution’s governing council, commended the management for its outstanding performance and for maintaining uninterrupted academic progress.

In his remarks, Governor Biodun Oyebanji of Ekiti, who was represented by the Secretary to the State Government, Habibat Adubiaro, said the state was blessed to have the institution in the state in terms of its educational importance.

He restated the administration’s commitment to its six-point agenda of job creation, human capital development, rural development and infrastructure, industrialisation, arts, culture and tourism as well as good governance.

Mr Oyebanji said the agenda was designed to bring the desired succour and relief and make a meaningful impact on the welfare and well-being of the people of the state.

The visitor to the institution and Minister of Education, Adamu Adamu, was represented by Grace Jakko, Director, Technology and Science Department, Federal Ministry of Education, Abuja.