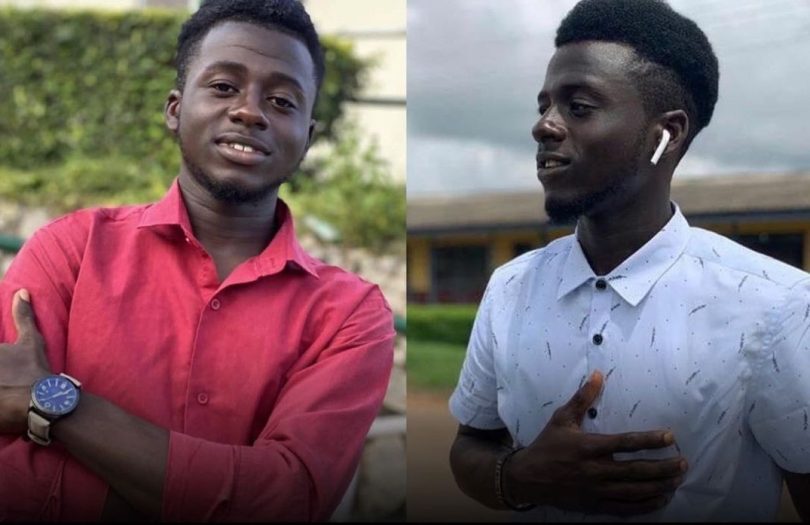 Nigerians are agonising over the death of Olona Joseph Oluwapelumi who was found hanging from the ceiling of his room off-campus on Saturday, January 21st 2023.

Joseph was a 300 level student of Industrial Design at the Federal University of Technology, Akure, Ondo state. He was the financial secretary of his department and reported to have been accused of fraud.

A friend of the deceased, Omoniyi Enoch during an interview with the some campus journalists in the school, gave details of the fraud allegation.

According to Enoch, “When school resumed for the 2021/2022 session, the treasurer of the department was not around to receive payment for dues. Joseph (Olona) decided to receive the payments from students.

“The president requested that he should send N100,000 to him for a departmental project. Joseph sent it using his digital bank – Carbon. He was debited but the president did not receive the payment. Several mails were sent to the bank but the issue wasn’t resolved.”

Omoniyi said the lack of communication from the digital platform got his friend worried as his mates stayed away from him. He also stopped attending lectures because of the pressure.

On Friday morning, Joseph informed Omoniyi that the head of his department had called his dad to inform that his son (Joseph) had been engaged in fraud.

“He was very disturbed about it. He requested to follow me to my office at the Students’ Union Building because he didn’t want to stay alone. I left him at the office to attend the homecoming event that was held at T.I Francis auditorium and also watched the Awopegba match.

“When I got back to the office, he had already locked the office door. He came back to give me the keys and left. When I got home, I forced him to eat. At 7:40pm, I knocked on his door but he didn’t open. I left thinking he was still angry at me for leaving him at the office. At 8:30pm, I knocked again but there was no response. At 10:01pm, I tried again but there was no response and I went to sleep.

“In the morning, I went to knock around 8am but there was no response. I had to go and check through his window and I saw him hanging from the ceiling.” Omoniyi said.

In a statement issued by the Student Union Government and signed by its President,  Jesunifemi Asoore, Joseph was said to have been confirmed dead in the early hours of Saturday, January 21, 2023. 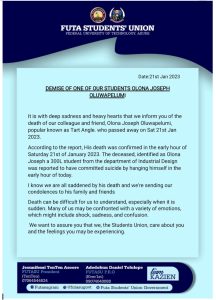 As the news broke on social media, netizens have been sharing divergent views. Whereas some expressed their condolences and called for mental health awareness, others faulted the head of department and the digital platform for failing to respond to the mails.

May his soul rest in peace, depression should really be jettisoned amongst students -EluyeraAbiodun (@eluyera-abiodun)

Suicide isn’t the last option, where there is life there is hope😔Rip – Web 3 (@web3child)

It’s pathetic. Share your problem. You have no right to take your life. -Charles Barefe(@charlesBarefe)

We are all saying “he should have spoken up “but isn’t everyone shouting sapa, are we not seeing Shegebanza again. You don’t need to blame the dead. The deed has been done instead, check on a friend today, put a call through and know about their well being. RIP Tart Angle –Akinwande Ayomide James (@Ayomide_VIP1) 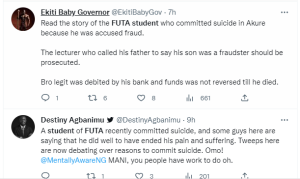 When you see people, young and old committing suicide just because they are broke or in debt, you wonder what kind of country is this. Unfortunately, we don’t learn. We will still vote the same people. No plans to cater for the poor – A.K John (AKJohn24034890).

This sad tale could be avoided. Persons involved if only they had been kinder in the words. If only the bank was proactive to this issue , all this could have been avoided. Mental health is real and doesn’t take so much to put it into account – ThatMentalChick (@Teelash DavidoO).

Why would the HOD involve the father to lay an unfounded allegation against him? Did the Dept/Union get a formal report from Carbon before concluding that he actually lied about the fund transfer?? So many unanswered questions – ‘engraced (@damilarelr).

His HOD accused him of Fraud? If this is true then the HOD has some explaining to do. What happened to wrapping an arm around a young boy with no prior criminal record rather than hanging him out to dry. – Olumide Abiodun Akinyemi (Facebook) 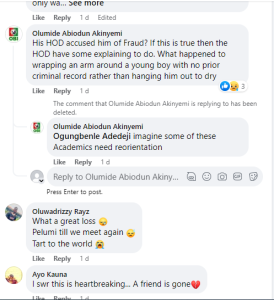 Meanwhile, our reporter tried reaching out to Carbon digital bank for their comments on the story, but no response was received as at time this report was published. New developments will be shared as the story unfolds.