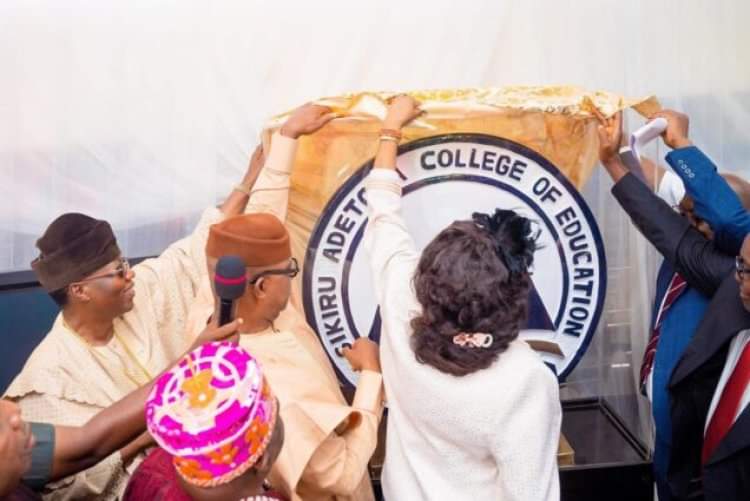 The renaming is with a pledge that the institution would remain a College of Education with the mandate to groom middle level teachers for the educational System of the country.

Abiodun made this known during the formal unveiling of Sikiru Adetona College of Education, Science and Technology.

He stated that his administration would not relent in its quest to make the institution an envy of others in the country.

While noting that despite the change in the name, the governor pointed out that the institution will continue to run its degree programmes, as well as accommodate science and technology courses.

He declared that his administration would be supporting the College in the area of infrastructure, disclosing that the ongoing reconstruction of road from Ala passing through Omu-Ijebu would soon be commissioned.

“The College will remain a College of Education with a mandate to groom middle level teachers for our educational System. The College will continue to run its degree programmes in affiliation with universities.

“We will also be supporting the College in the area of infrastructure; in fact, very soon, we will commission the internal roads of the College and the road from Ala passing through Omu,” he said.

Abiodun who said that Ijebuland has prospered under the Awujale, also commended the monarch for single handedly establishing a world-class International Institute of Governance at the Olabisi Onabanjo University, Ago Iwoye.

He further acknowledged the monarch for not only creating room for development in the land and praised him for also facilitating developmental programmes through his friends and associates into the state.

The state helmsman who also called on the sons and daughters of Ijebuland to see the unveiling of new college as a challenge to make their presence felt in the institution, said, “Just as Ijebuland is blessed with long and progressive reign of Kabiyesi, the time has come for us to join hands in creating a legacy for Kabiyesi by investing heavily in this institution.”

The Speaker, Ogun State House of Assembly, Olakunle Oluomo, who noted that there was no dissenting voice when the bill to change the name of the institution was brought to the House, added that the contribution of the monarch to the growth of education in the state is highly commendable.

Earlier in his remarks, the Chairman of the Governing Council of the institution, Adeyemi Adefulu, said that the emergence of the college as Sikiru Adetona College of Education, Science and Technology was part of the massive and fundamental re-organisation of the college.

Adefulu while noting that the Governing-Council has been instrumental in achieving stability in the college, said that the council has zero tolerance for indiscipline and lawlessness.

He, however, commended Governor Abiodun for his immeasurable support for the institution, submitting that, “the saving of TASCE now Sikiru Adetona College of Education, Science and Technology(SACOETEC) from perdition is sufficient proof of the governor’s commitment to educational development and adroit management”.

The Awujale and Paramount ruler of Ijebuland, Oba Sikiru Adetona while commending the Governor for his leadership style, said that his various performances speak volume of a man who is well accepted by the people.

Oba Adetona who opined that the forthcoming coming election is a done deal for the governor, said that the governor is fully in control of things in the state.