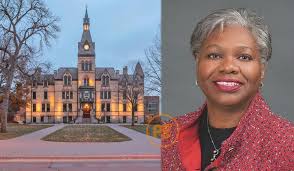 The management of Hamline University has withdrawn its “Islamophobic” comments against Erika López Prater, a lecturer who got fired for displaying a painting of Prophet Muhammad in her art history class last October.

Hamline’s backpedalling came after Ms Prater sued the school on the grounds of religious discrimination and defamation that has “irreparably harmed” her professional reputation.

“Like all organisations, sometimes we misstep,” said a statement from Ellen Watterschair, chair of the university’s board of trustees, and Fayneese S. Miller, the president.

“In the interest of hearing from and supporting our Muslim students, language was used that does not reflect our sentiments on academic freedom. Based on all that we have learned, we have determined that our usage of the term ‘Islamophobic’ was therefore flawed,” the statement added.

Hamline admitted their respect for students’ religion should not supersede academic freedom.

Last October, Ms Prater had displayed a painting of the holy Prophet Muhammad in her art history class, an action that offended Aram Wedatalla, president of Hamline’s Muslim Student Association, who said she had never seen the prophet’s image in her life until the art class.