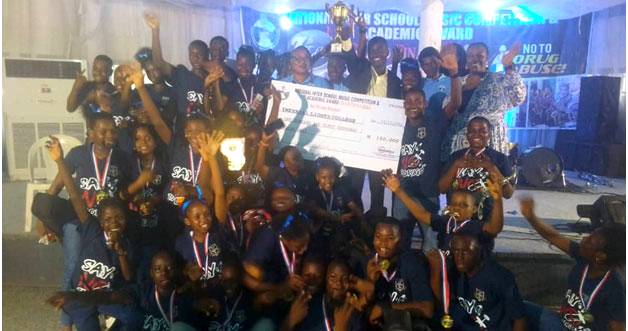 Executive Director of National Inter-School Music competition and Academic Award, NISMCAA, Olubunmi Adebowale, has warned students against the use of drugs.

Adebowale gave the warning at of NISMCAA tagged: ‘Say No To Drugs’ held at the NUT Pavilion, Alausa Ikeja.

According to Adebowale, the use of illicit drugs could destroy their future.

Among the schools that participated in the final competition were Honeyland School, Fluorescent School, Imperial Lights College, Kunlop Royal College, and Westminster College.

Speaking on the theme for this year’s competition, Adebowale, who represented the Founder and President, Olushola Adebowale, said the competition aimed at using music as a moral tool against vices in society.

She added that the competition, which started in 2009 among public and private secondary schools, was to give students the opportunity to showcase their talent and get discovered, with the introduction of the academic award as a way of rewarding academic excellence in schools using music as a tool.

Adebowale further said students who participated in the past had got scholarships, endorsements and opportunities to perform at major music concerts.

She said the theme: ‘Say No To Drugs,’ was chosen to address and seek solutions to illicit drug usage by Nigerian youths.”

The project Coordinator, Adetokunbo Kashim, said the competition was put together ‘to let the world know we have to say no to drug abuse.’

Imperial Lights College emerged winner of this year’s competition in the Schools Group Category with a cash prize of N150, 000, while the first and second runners-up won N100, 000 and N75,000 respectively.