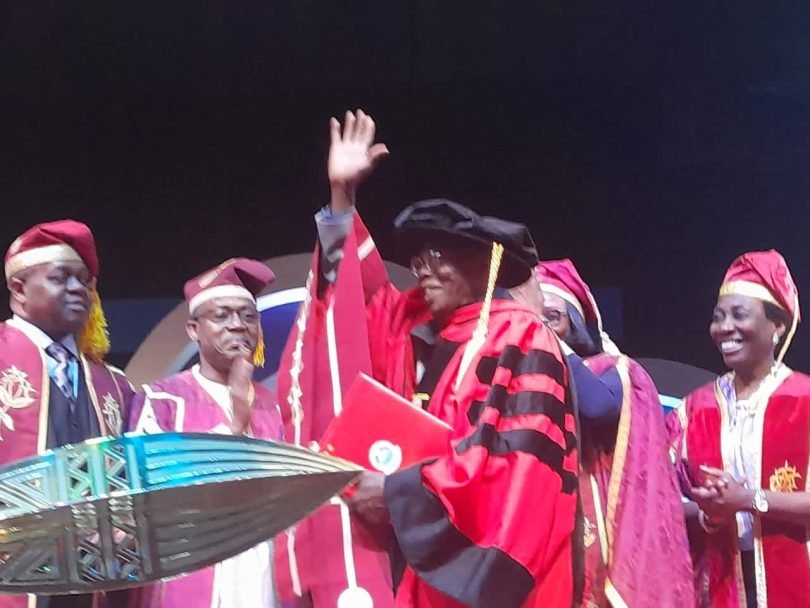 It was all a merry and high-spirited atmosphere at J.F. Ade Ajayi Auditorium (Main Auditorium) at the University of Lagos (UNILAG) on Wednesday, January 18 2023, as octogenarian Micheal Dayo Duyile was conferred a doctorate degree.

At 83 years old, the degree is a dream come true for Mr Duyile, who has spent close to 60 years in the field of journalism.

Speaking with Lekan Otunfodunrin, fellow veteran journalist and executive director of Media Career Development Network, in 2018, he said: “I have always wanted to get a PhD in Mass Communication, which I teach, and Journalism, which I have practised for 55 years. It’s never too late to get an additional qualification, including a PhD.”

Mr Duyile was never shy to admit how he had long coveted and aspired to acquire the highest certification in academia in the field of journalism.

In an interview at a sideline at the event, he remarked that with his new academic attainment, he is now fulfilled as a journalist. He said it took him about 40 years to achieve the dream of becoming a doctoral degree holder in Mass communication. He said he was longing to go for his PhD programme just after his master’s degree when he was 35 years old but for some reasons which include time factor, he was prevented from doing so all along.

But I thank God for making the dream a reality now and I will continue to study and become a professor.

Now, Dr. Michael Dayo Duyile is the oldest graduate to bag a PhD from the University of Lagos in the institution’s 60-year history. He obtained his PhD in Mass Communication.

Mr Duyile is one of 2,251 postgraduate students from the University of Lagos who received Postgraduate Diplomas, Masters and Doctorates during the institution’s 53rd Convocation Ceremonies.

Recall that the Academic Staff Union of Universities (ASUU) embarked on a strike action leading to the closure of public universities in the country, beginning February 14, 2022, to demand full implementation of agreements it entered into with the Federal Government a few years ago.

Hence, for the first time in many years, the convocation ceremonies featured no single undergraduate among the graduates due to the university workers’ prolonged industrial action which paralysed academic and non-academic activities across major Nigerian public universities in 2022. On October 14, 2022, the Academic Staff Union of Universities (ASUU) conditionally suspended the 8-month-old strike.

Born in October 1942, Dr. Michael Dayo Duyile is a former provost of the Nigerian Institute of Journalism (NIJ). According to the vice-chancellor, Dr. Duyile “was the Daily Times of Nigeria journalist who covered the opening ceremony event of the University of Lagos on October 3, 1962.”

In addition, Dr. Duyile had worked in various media organisations in Nigeria including Nigerian Tribune and Daily Times and he is currently a lecturer, researcher, journalist and
book writer.

The Vice-Chancellor disclosed that the university had produced no fewer than 200,000 graduates in various disciplines so far in 60 years of its establishment.