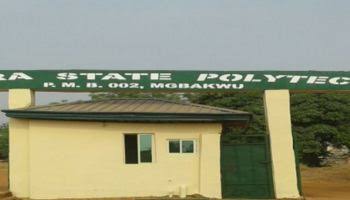 Following the continued neglect of the institution by the government, students of the Anambra State Polytechnic, Mgbakwu in Awka North Local Government Area of the state have staged a peaceful protest.

The students of the institution, who held the protest on Wednesday 2nd October, 2019 to register their displeasure over infrastructural deficits in the school and delay in the accreditation of the institution, blocked the entrance to the institution. They also paralysed administrative and academic activities at the polytechnic.

Speaking on behalf of the students, President, Students Union Government of the school, Mr. Innocent Ikegbuna, said the protest followed series of unfulfilled promises by the government three years after it was upgraded to a polytechnic.

He said: “Apart from infrastructural deficits inside the school, the deplorable condition of the only road leading to the polytechnic is a nightmare to both staff and students.”

“We all abandoned our studies because we are uncertain of our future in the polytechnic. Our concern is that the polytechnic is yet to be accredited and when those who have graduated apply for jobs, they are told that their certificates are invalid,” he explained.

“Those of us that finished ND in the polytechnic are unable to gain admission into any other institution while those who have finished their HND are unable to go for National Youth Service,” he added.

Some graduates of the school who joined in the protest lamented their inability to be mobilised for youth service as a result of non-accreditation of the school, stressing that they are unable to secure jobs due to invalid certificates.

Addressing the students, Commissioner for Tertiary Education, Science and Technology, Prof. Nkechi Obiekezie, said the government had been making effort to ensure full accreditation of the school.

She noted that the Polytechnic had passed the verification test of the National Board for Technical Education (NBTE), which prompted the board to schedule a visit to the institution by October.

“The National Board for Technical Education (NBTE) had already visited the school last year for verification and subsequent accreditation,” she noted.

“Having finished the verification, they will come again this October for accreditation. I am surprised that your school authority did not inform you of the progress so far,” she added.

Meanwhile, the school has been shut down by the management following the protest, while all the students have been directed to vacate the school until further notice.”