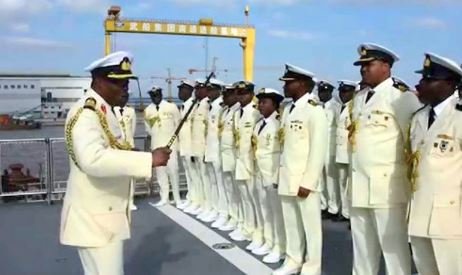 This year’s event which held in Cross River, was the third graduation ceremony since the establishment of the institutions in 2017. This set is also the first batch of graduands from the permanent site of the institution in Calabar.

While addressing the graduating officers, the representative of the Minister of Defence, Gen. Abayomi Olonisakin, said, “The nation expects you to be focused on your assigned duties and to justify the huge resources that were committed to your training.”

“This can be achieved by employing the knowledge and competence gained from the college in your future assignments, he added.

“I am optimistic that your performance in the field would attest to the growing reputation of the college as a centre of excellence for maritime security studies in the sub-region,” he noted.

The minister commended the efforts of the Chief of Naval Staff, Vice Admiral Ibok-Ette Ibas, the college board, the commandant, members of faculty and the workers.

Cross River State Deputy Governor Ivara Esu,represented Governor Ben Ayade at the event. He thanked the Federal Government for establishing the college in the capital town.

He said the present administration would continue to support the college to achieve its aims and objectives.

The college’s Commandant Rear Admiral A. O. Ayobanjo, stated that the participants passed through written and oral assessments and had been imbued with the capacity to plan and execute warfare in defence of the nation.