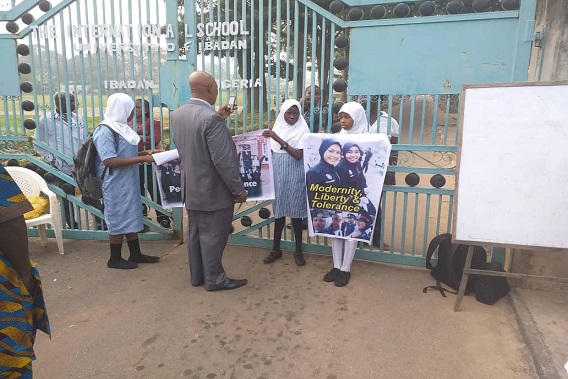 Following an act of impudence to the school’s authorities, the authorities of the University of Ibadan International School have announced the suspension of a female Muslim student, Miss Ikhlass Olasubomi Badiru, for wearing Hijab within the school premises.

The two-week suspension, according to a letter signed by the School Principal, Phebean Olowe, on Wednesday 2nd October, 2019, takes effect between 7th and 18th October, 2019.

It was reported that the school set up a committee to look into the matter and subsequently came out with a report to suspend the student.

The Principal of the school, Phebean Olowe in the letter entitled, “Letter of Suspension”, addressed to Badiru, stated that the disciplinary committee looked into Badiru’s action and found her guilty of act of impudence to the school authority.

Olowe in the letter said, “At the meeting of the Students Disciplinary Committee (SDC) looking into students’ misconduct held on Wednesday 28th August, 2019, you were found guilty of act of impudence to school authority.

“Your action contravenes the school’s rules and regulations. Therefore, you are to serve two-week full suspension effective from 7th October to 18th October, 2019.

“Also, you and your parents shall be expected to report to the counsellor on Monday 21st October 2019 to present a written undertaking to the school to obey rules and regulations throughout your remaining days on the school,” he stated.